From Record Makers to Record Breakers: Audio’s Odyssey through Time

Music has always been an important part of human culture, dating all the way back to ancient civilizations. Archeologists have unearthed harps in Egypt and primitive trumpets in Rome, as well as Grecian vases and tablets illustrating the presence of musical instruments at religious rites, ceremonies, and even the battlefield. Fast forward to the modern age, music still remains a prominent feature at celebrations, from weddings to graduations and other significant milestones. While the world’s appreciation for music may not have diminished over the years, the way we consume music has gone through several transformations. With this post, we’re taking took a look back through time to see how the world’s consumption of audio has evolved through the ages:

In today’s connected world, it’s easier than ever to listen to any song, anytime, anywhere – but it wasn’t always so simple. Before Thomas Edison invented the phonograph in 1877, melodies could only be captured by hand – or transcribed on sheet music. People could only listen to music when someone else was playing it for them, whether at home or in a concert hall. The phonograph, which was the first device that could record sounds and play them back using a tinfoil cylindrical disc, is widely considered as the first of many significant milestones in the evolution of audio consumption. Over time, Edison’s cylinders eventually gave way to the hard, flat discs we recognize today as vinyl records. 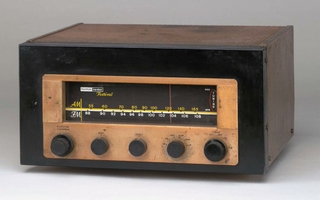 By the early 1900s, almost every household had some form of a record player, and record sales soared over the next decade. Phonographs were succeeded by radios, and in 1953, Harman Kardon introduced the first FM tuner.

Driving Into the Digital Age

For several years, vinyl records seemed to be the preferred method of listening to music, but their fragility and sensitivity to scratches and imperfections did not always produce the ideal acoustic experience. In time, the popularity of vinyl was eclipsed by the cassette tape, whose commercial breakthrough in the mid-1960’s and magnetic tape recording technology improved the audio quality of recordings. In 1975, the German audio company Becker launched the first car cassette radio, which meant people were no longer at the mercy of the radio DJs, and could take their own carefully curated album collection on the go. In 1984, JBL made their automotive debut in that year’s Lincoln Town Car, as the first branded car audio system.

A major audio transformation also came about in the 1980’s with the introduction of the Compact Disc. CDs exploded in popularity, thanks to their extended amount of playtime and high audio quality, as well as the CD players’ ability to overcome the effect of scratches, smudges, or dust. CDs reigned supreme for over a decade, until the rise of MP3 audio files. Thanks to the widespread adoption of the internet, the MP3 became the ultimate standard for online music, from downloading to file sharing and today’s form of music consumption: streaming. 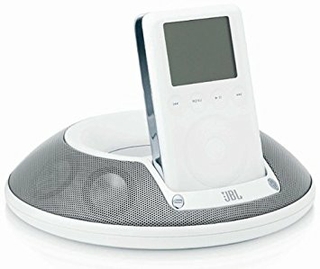 In the early 2000’s, the arrival of the iPod gave listeners instant access to an infinite number of songs, albums, and playlists. Listening to music had never been so personalized, and everyone quickly embraced this new popular technology. JBL released one of the first iPod audio docks so users could project music throughout their homes instead of only through their headphones, and automakers installed auxiliary inputs so users could connect their preferred MP3 devices to their vehicle’s audio system. 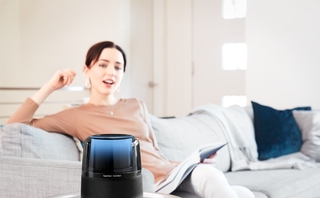 As audio technology continues to improve and our lives to become increasingly more connected, we’re listening to music more often and in more places than ever before. In a 2017 study, Nielsen found that Americans spend over 32 hours a week listening to music, more than 5 hours more compared to previous years. Whether we’re listening to relaxing tunes at home, pounding exciting songs through our headphones for a workout, or enjoying the perfect soundtrack while cruising down the highway, new technology allows listeners to engage with music anytime, anywhere. Thanks to the vast array of digital assistants and smart speakers, selecting a playlist and listening to music has never been more effortless. It almost seems impossible to imagine what more could possibly be in store for the future of audio. Only time will tell for sure, but we can be certain that it will be ever more intuitive, immersive, and connected.