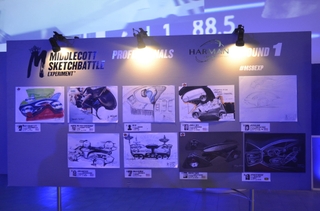 Over the years, this event has been judged by a unique cross-industry panel of experts and design luminaries. This year, our own Matt Marrocco, Senior Industrial Designer at HARMAN’s Novi Design Studio, was among the judges for the experiment. As a judge, Matt played a part in deciding who won the title of World Champion Sketchmaster and received the grand prize of $2,500.

The Sketchbattle featured a pool of design talent made up of both auto industry professionals and art college students, who raced against the clock in three elimination rounds of live sketching to determine the winner. Versatility and creativity were key, as each round challenged them to conceptualize and sketch a different aspect of a vehicle – including an in-car speaker system. At the conclusion of the battle, the judges were pleased to name Xander Wang this year’s World Champion Sketchmaster!

It was an exhilarating event, and HARMAN was thrilled to be part of it. As an organization committed to best-in-class design, product design and innovation, we’re always on the lookout for talented designers to join our team and lend their creative brilliance to our growing list of collaborative OEM projects. If this sounds like you, we encourage you to check out our open positions. 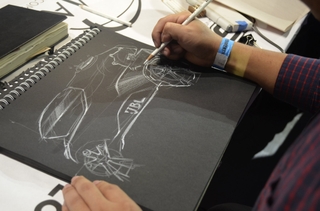 We’re All Ears for No Shark Fins—Smart Conformal Antenna