On Their Way to Better Things

By Mike Mettler and Christopher Dragon

With Summer NAMM 2018 here, we’re reminded of HARMAN’s deep audio heritage and all the remarkable artists who have continued to partner with us to create some musical magic. But Summer NAMM is far from the only event where the HARMAN team delivered on its promise to provide superior audio experiences to conference attendees. 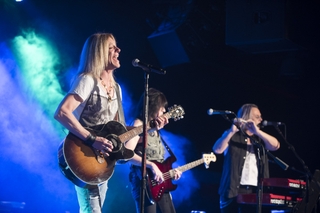 The Guess Who were the HARMAN family’s very special guests at CES 2018, performing an electrifying invite-only set at the Vinyl nightclub at the Hard Rock Hotel in Las Vegas on January 8. Want to go behind the scenes with me to see just how it all went down before, during, and after? I thought you’d never ask.

During that afternoon’s soundcheck, a surprise guest artist, Styx guitarist/vocalist Tommy Shaw, joined The Guess Who onstage at Vinyl at various points to rehearse his contributions on the following three songs: vocal backing on “Haunted,” lead vocals and guitar on “American Woman,” and harmony vocals and lead guitar on “No Time.” 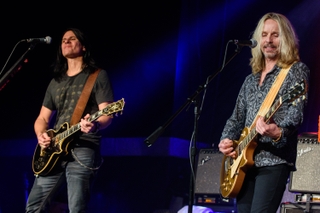 Guess Who lead vocalist/guitarist Derek Sharp loaned Tommy one of his guitars for the dual plug-in, and he stepped offstage and down into the mostly seated soundcheck audience while Tommy and Guess Who lead guitarist/backing vocalist Will Evankovich worked out the first few verse/chorus run-throughs of “American Woman.” A few minutes later, Derek began singing his part of the song while still standing amidst the rapturously responsive soundcheck audience, then he clambered back up onstage with his bandmates for a rousing finish. Tommy stayed out with the band to work through a hot blues-vamp toward the end of “No Time,” as well as go through the harmonies for “Haunted.” (Incidentally, “Haunted” is a key track from The Guess Who’s upcoming new studio album that’s set for release later this year via the Cleopatra label.)

Then it was time for a short break, as everyone headed back into The Guess Who’s green room located just down the hall. Once inside, everyone was met quite enthusiastically by some good, longtime friends, family, and associates including Canadian chanteuse Sass Jordan (a.k.a. Derek’s better half) and band manager Ron Stone (who had also worked with Tommy Shaw for a while during his 1980s solo career, circa Girls With Guns).

Ever the perfectionist, Tommy observed, “I have some homework to do!” just as everyone was seated for a quick bite at the nearby Pink Taco restaurant, studying lyrics and singing his parts into his iPhone at close range as voice memos to make sure he had all the nuances down pat. “No time for a summer friend” and “you need not wonder why” were two phrases he repeated into his phone more than once, with varying inflections. (Both phrases are, of course, key lines from “No Time.”)

Then it was back to the green room for some final vocal prep as Derek, Will, and Tommy worked together on their harmonies, with Tommy strumming an acoustic guitar for accompaniment. Every now and then, bassist Rudy Sarzo and keyboardist/saxophonist/flautist Leonard Shaw (no relation to Tommy!) would join in on the fun, as well as Guess Who founding drummer/band historian Garry Peterson. (At one point, Peterson came over to me and said, “Since you have a vest on too, you can play drums, and I’ll write!” Luckily for the assembled audience over in Vinyl patiently awaiting set time, I respectfully declined his swap-offer.)

Derek, Tommy, and Will continued to tag team on the lines they’d all sing together. At one point, Derek (a.k.a. D. Sharp) retired to the bathroom to continue his own personal one-man warmup routine, including belting out the instantaneously recognizable title line to Bon Jovi’s perennially classic “Living on a Prayer” a few times (not the first time he’s done so, but that’s a story best served at another time).

And then it was showtime, as The Guess Who hit the stage a little after 8 p.m. Pacific time to start the night with “Bus Rider,” a classic track from the band’s 1970 masterpiece, Share the Land. Five songs later, Derek sat down at the keyboard and introduced “Haunted” as being a song about his mother. In the back half of the song, Tommy came out to center stage to sing harmonies, with D. Sharp later observing, with a bit of a wink, “How about that Tommy Shaw? He seems nice.” 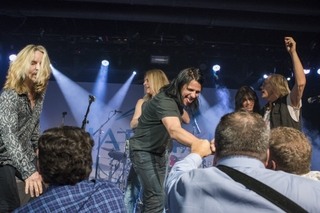 Four songs after that, Tommy returned to the stage, guitar in hand, for the uber-energetic set closer, “American Woman.” The ensuing encore found our man Will E. take a blisteringly cool harmonica solo during another new song, “In America,” before Tommy reappeared for a raucous take on “No Time,” including his own damn-fine gnarly ’n’ gritty guitar solo. Everyone onstage then took their respective bows at 9:30 p.m. to officially close the stirring 13-song set.

Back in the green room less than three minutes after coming offstage, Will enthused with a grin, “It’s fun!” and Derek concurred, “That was fun, man!” Tommy took a philosophical beat and noted with some clear admiration, “The Guess Who stuff is deceptively complex. Their songs are fun to play, elegant, and arranged with lots of detail.”

Collectively referring to himself, Will, and Tommy as “The Three Amigos,” Derek offered up some of the most profoundly heartfelt words of the night by declaring, “This doesn’t happen very often. We have to cherish these moments.” Everyone agreed, and then it was soon off to the Pink Taco once again, this time in search of the perfect shot (or two) of tequila — and that’s when this author’s notebook was officially put away for the balance of the evening, as discussions of cosmic topics like who’s the most “earth adjacent” followed on the ensuing verbal docket. I found myself some wings. . .