WASHINGTON, D.C. & STAMFORD, CT – The John F. Kennedy Center for the Performing Arts and HARMAN International Industries, the premier connected technologies company for automotive, consumer and enterprise markets have extended their longstanding relationship with a multi-year partnership including the addition of HARMAN’s high-performance audio and lighting products supporting The Kennedy Center’s ambitious expansion project. As part of the expanded relationship, HARMAN becomes the official sound of The Kennedy Center. JBL Professional® speakers, AKG Acoustics® microphones, Crown® amplifiers, AMX® receivers, digital lighting from Martin® and sound editing equipment from its Soundcraft®, BSS Audio® and dbx® brand will continue to amplify and elevate the more than 3,000 productions, performances and classes that take place each year at the nation’s busiest performing arts center and living memorial to President John F. Kennedy. 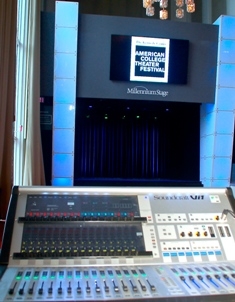 Highlights of The Kennedy Center’s first major expansion since opening in 1971 include the addition of 72,000 square feet of new public access spaces with open rehearsal studios, dedicated education spaces and social spaces such as a convertible café and outdoor gardens. Other features include an outdoor video wall where performances can be simulcast, an outdoor performance space and multi-purpose spaces for the Center's extensive programming, performance and arts education offerings. The expansion project will attract more international performers and productions that require dynamic in-house lighting equipment for their shows.

“HARMAN technology has played an integral role at the Kennedy Center for more than 20 years. In fact, each of our nine stages is equipped with HARMAN products providing the lighting and sound infrastructure required to produce world class arts,” said Deborah Rutter, President of the John F. Kennedy Center for the Performing Arts. “We are grateful for HARMAN’s engagement and confident the new systems will allow us to continue to produce and present arts and education programming of the highest caliber at the nation’s busiest cultural center.

“HARMAN is extremely proud to expand our relationship with The Kennedy Center and contribute to the future of this prestigious institution that is so vital to the performing arts,” said Dinesh C. Paliwal, Chairman, President and Chief Executive Officer of HARMAN. “For more than 70 years, HARMAN has been the technology partner of choice for the most highly regarded entertainment complexes in the world – from theaters and cinemas to stadiums and arenas.  We are excited that The Kennedy Center has once again called on HARMAN to bring their ambitious expansion plans to life and eager to elevate their performances and events for the thousands of people who will visit each year.”

To date, $150 million has been raised under the Kennedy Center’s “Building the Future” campaign, which is contributing vital funds to support the Center’s expansion project.

ABOUT THE KENNEDY CENTER

The John F. Kennedy Center for the Performing Arts is America’s living memorial to President Kennedy. Under the leadership of Chairman David M. Rubenstein and President Deborah F. Rutter, the nine theaters and stages of the nation’s busiest performing arts facility attract audiences and visitors totaling 3 million people annually; Center-related touring productions, television, and radio broadcasts welcome 40 million more. Opening its doors on September 8, 1971, the Center presents the greatest performances of music, dance, and theater; supports artists in the creation of new work; and serves the nation as a leader in arts education.

With its artistic affiliates, the National Symphony Orchestra and Washington National Opera, the Center’s achievements as a commissioner, producer, and nurturer of developing artists have resulted in more than 300 theatrical productions, and dozens of new ballets, operas, and musical works. Each year, millions of people nationwide take part in innovative, inclusive, and effective education programs initiated by the Center, including school- and community-based residencies and consultancies; age-appropriate performances and events for young people; career development for young actors, dancers, singers, and instrumentalists; and professional learning opportunities for teachers, teaching artists, and school administrators. These programs have become models for communities across the country. The Center’s Ensuring the Arts for Any Given Child program works with selected local school districts and seeks to provide a comprehensive arts education to children K-8. The Center also has been at the forefront of making the performing arts accessible to persons with disabilities, highlighted by the work accomplished with its affiliate, VSA. As part of the Kennedy Center’s Performing Arts for Everyone outreach program, the Center stages more than 400 free performances of music, dance, and theater by artists from throughout the world each year on the Center’s main stages, and every evening at 6 p.m. on the Millennium Stage. The Rubenstein Arts Access Program expands the Center’s efforts to make the arts accessible to children, to young adults, and to people who have little or limited ability to attend and enjoy the performing arts, enabling audiences to engage in more ways, at more times, and in more places than ever before.

HARMAN (harman.com) designs and engineers connected products and solutions for automakers, consumers, and enterprises worldwide, including connected car systems, audio and visual products, enterprise automation solutions, and connected services. With leading brands including AKG®, Harman Kardon®, Infinity®, JBL®, Lexicon®, Mark Levinson® and Revel®, HARMAN is admired by audiophiles, musicians and the entertainment venues where they perform around the world. More than 25 million automobiles on the road today are equipped with HARMAN audio and connected car systems. The Company’s software services power billions of mobile devices and systems that are connected, integrated and secure across all platforms, from work and home to car and mobile. HARMAN has a workforce of approximately 29,000 people across the Americas, Europe, and Asia and reported sales of $6.9 billion during the 12 months ended June 30, 2016. The Company’s shares are traded on the New York Stock Exchange under the symbol NYSE:HAR.

A Backstage Pass with Christopher Dragon: Creating that HARMAN Experience at the World's Largest Technology Show